Agile vs Waterfall: A tale of two methodologies 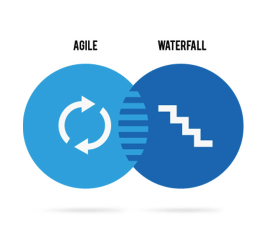 Whether you are using staff augmentation services from an IT outsourcing company or managing a project in-house, we’ve provided an overview of each methodology to help you make an informed decision as to which method works best for your unique project.

What is the Waterfall Methodology?

First established in 1970 by Winston Royce, Waterfall is like a workflow— each stage of the project is completed before you move on to the next stage. There are eight stages in total —conception, initiation, analysis, design, construction, testing, implementation, and maintenance. Once a stage is completed, you cannot go back to a previous stage without shutting down the project and starting over again. Any project using the Waterfall methodology must have a known project outcome, a plan set in stone from the beginning that is followed to the letter with zero mistakes.

Waterfall is best for projects where:

What is the Agile Methodology?

Agile follows an incremental approach with developers starting off with a simplistic project design, working on small modules in weekly or monthly sprints. Once each sprint is completed, project priorities are evaluated, and tests are run. These tests allow for bugs and defects in the code to be discovered sooner rather than later. It also accommodates for client or stakeholder feedback to be incorporated before the next sprint begins.

Agile is best for projects where:

Waterfall vs Agile, So Which One?

Choosing the right methodology depends on the context of your project. If you know upfront that you’ll need to take a more fluid approach that allows for changes as well as ongoing client and stakeholder input along the way, Agile is best choice.

If the client and stakeholders have a clear direction and defined outcome that will not require changes to be made as the project progresses, Waterfall is the best choice.

The question often arises, what about combining elements of each? It’s possible, but like most things, it takes some compromise and adjustments.